"Banner image is a photomicrograph of the cervical spinal cord in the region of the anterior horn revealing Polio Type III degenerative changes."

ID# 2759. Centers for Disease Control and Prevention, 1964. Available from http://phil.cdc.gov/phil/

Polio, also known as "poliomyelitis" and formerly "infantile paralysis," is a viral disease caused by poliovirus. Poliovirus does not usually make it past the gastro-intestinal tract. However, if the virus is not destroyed, it can make its way to the central nervous system, most often causing paralysis of the limbs, shoulders, or abdominal region. Polio can also affect breathing and respiration.

Polio has life-long consequences. Depending on where the viral infection takes place, paralysis can be permanent. Infections in the spinal cord region can be extremely harmful, especially if nerve cells are destroyed. In these cases, paralysis is often permanent. Some polio patients have extremely long and arduous recovery while rehabilitating their body.

Polio has been documented for thousands of years, but became an epidemic in the early twentieth-century. This was due to reasons unknown, but is thought to be due to a decrease in breastfeeding and a rise in public health and cleanliness. The theory is that children were missing vital maternal antibodies which fought the disease.1 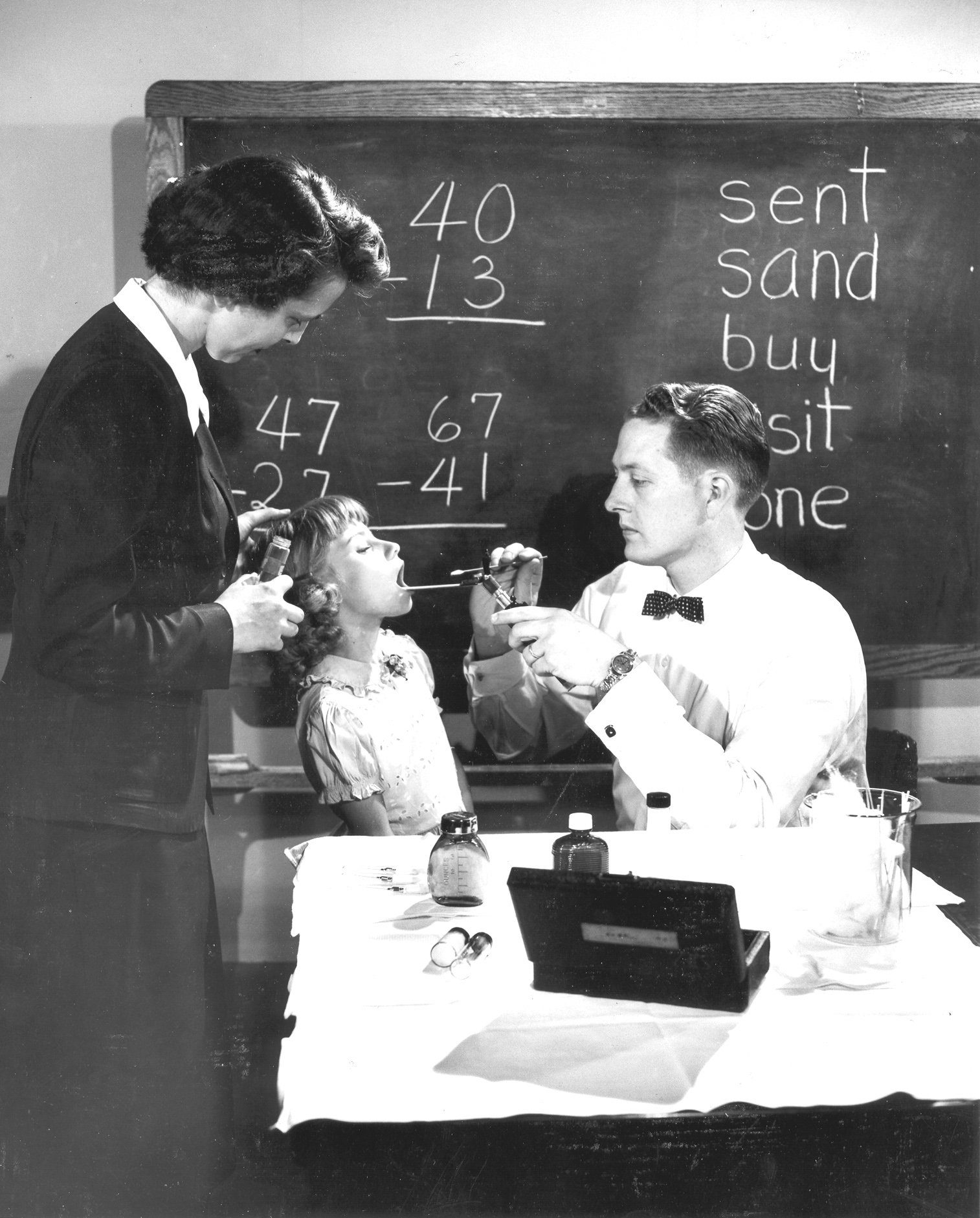 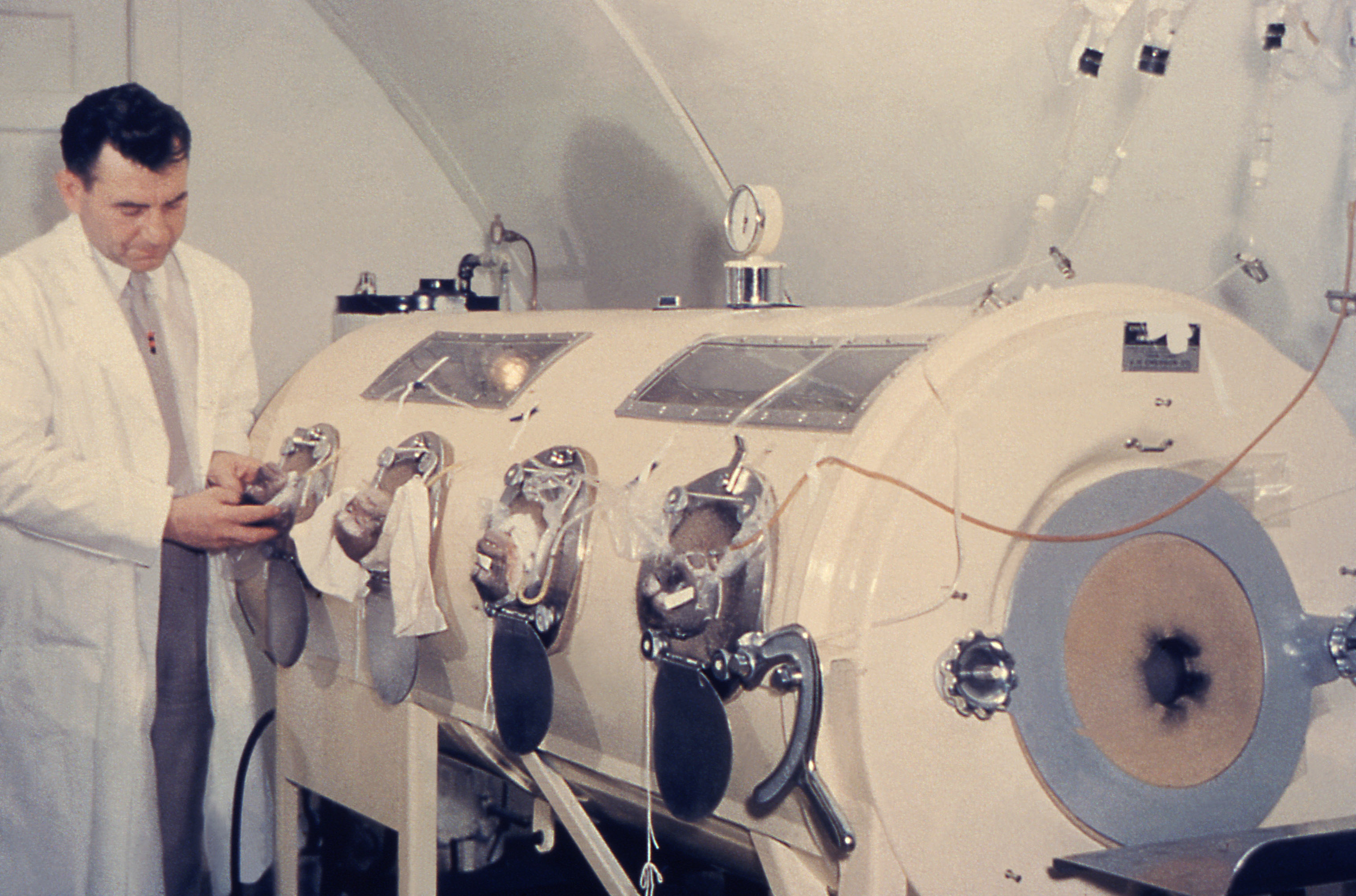 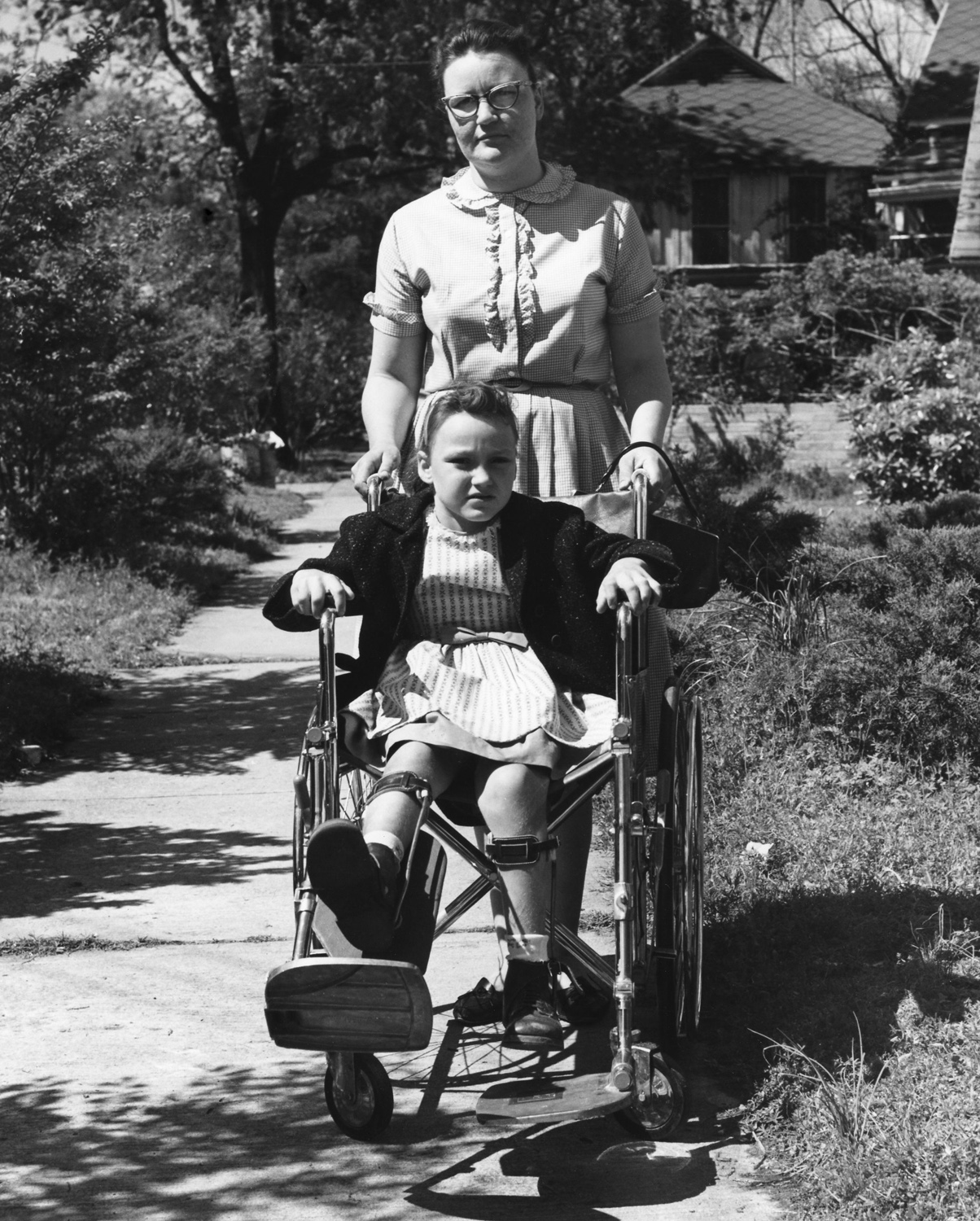 "Images like this were used to encourage individuals to receive polio vaccinations, which were made available in April, 1955."

Throughout the early to mid-twentieth century, Manitobans were gripped by fear of contracting the highly contagious and devastating disease -- polio. As the century progressed, the population affected by polio grew older. In the 1920s, it was common for children under the age of four to contract the disease, compared to the 1950s and 1960s when a significant amount of cases affected children between five and nine years of age.2

Most Winnipeggers diagnosed with polio were sent to the King George Hospital. Although now demolished to make way for the Riverview Health Complex, it was located at 1 Morley Avenue, in the Lord Roberts neighbourhood of Winnipeg. The King George Hospital opened in 1914 to provide isolated hospital access for communicable diseases. In the first few years, many cases of typhoid fever, scarlet fever, and smallpox were seen. In 1919, Spanish Influenza accounted for 3,789 patients. Although over a decade before Winnipeg's first polio epidemic, the first case of polio was seen at King George in 1917. A short while after Winnipeg's cases of polio began to subside, largely due to the Salk and Sabin vaccines, the isolation ward at King George Hospital closed in 1967.3

The phrase epidemic era is used by Leah Morton to describe the six polio epidemics which occurred in Manitoba, beginning in 1928 and ending in 1953. Throughout the era, thousands of Manitobans were affected by polio. Quoting Christopher Rutty, a Canadian medical historian, Morton lists the following reported Manitoban cases for each epidemic:4 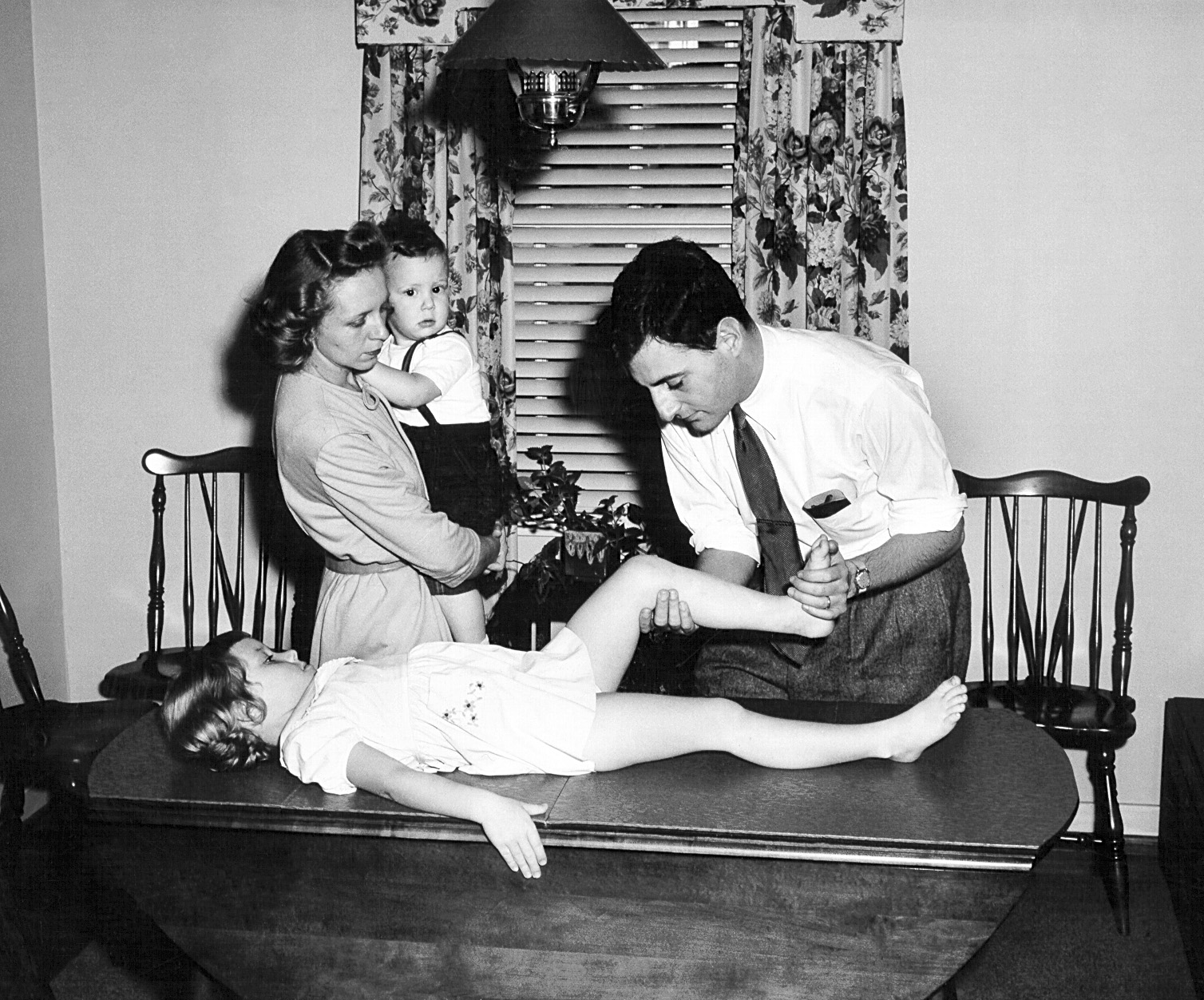 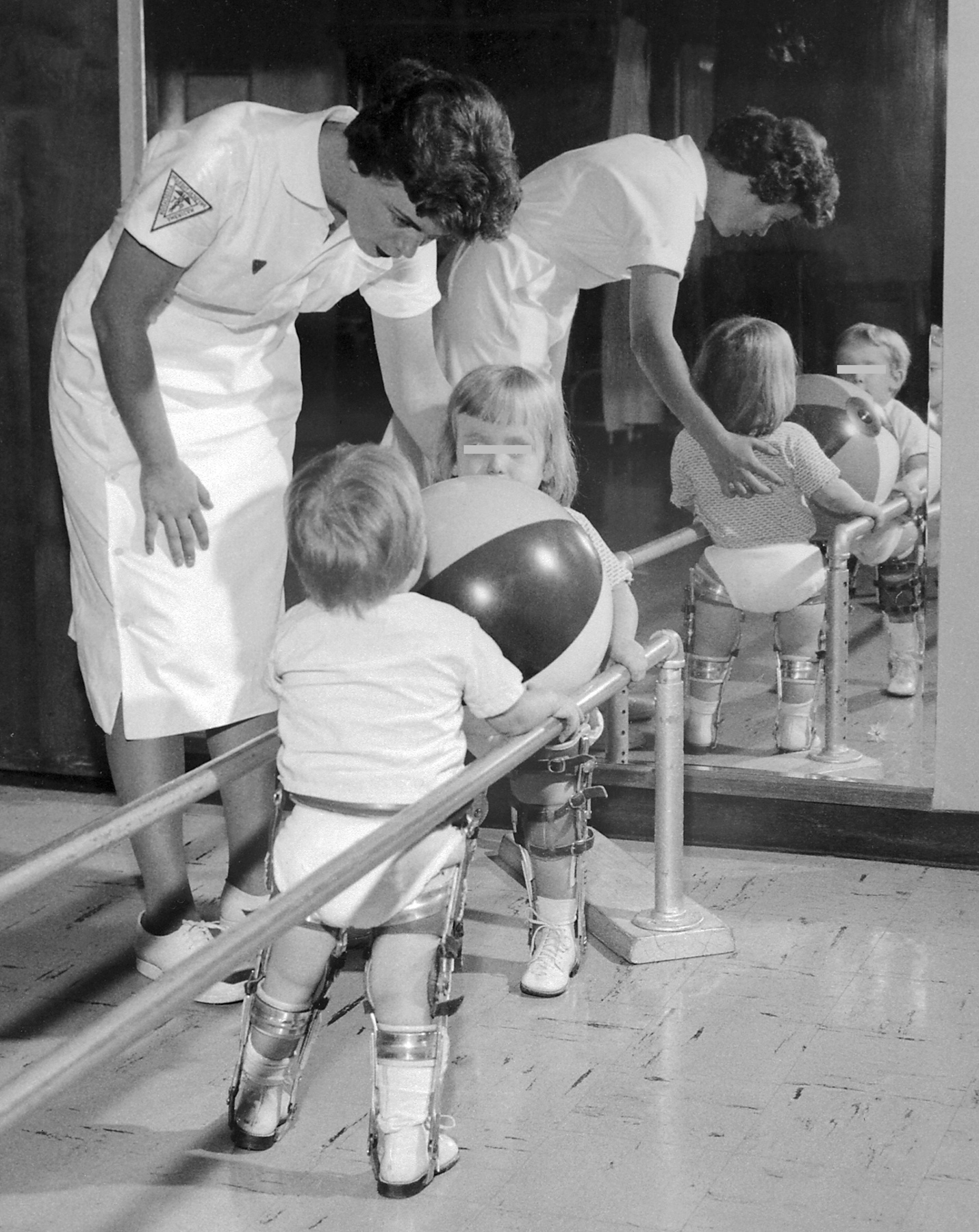 "This physical therapist is assisting two polio-stricken children holding on to a rail while they exercise their lower limbs, from 1961."

were ill-prepared for each epidemic, approached each outbreak in a reactionary adhoc manner, relied on public health tools that did not work against polio, and failed to engage meaningfully with the knowledge created by the wider medico-scientific community.5 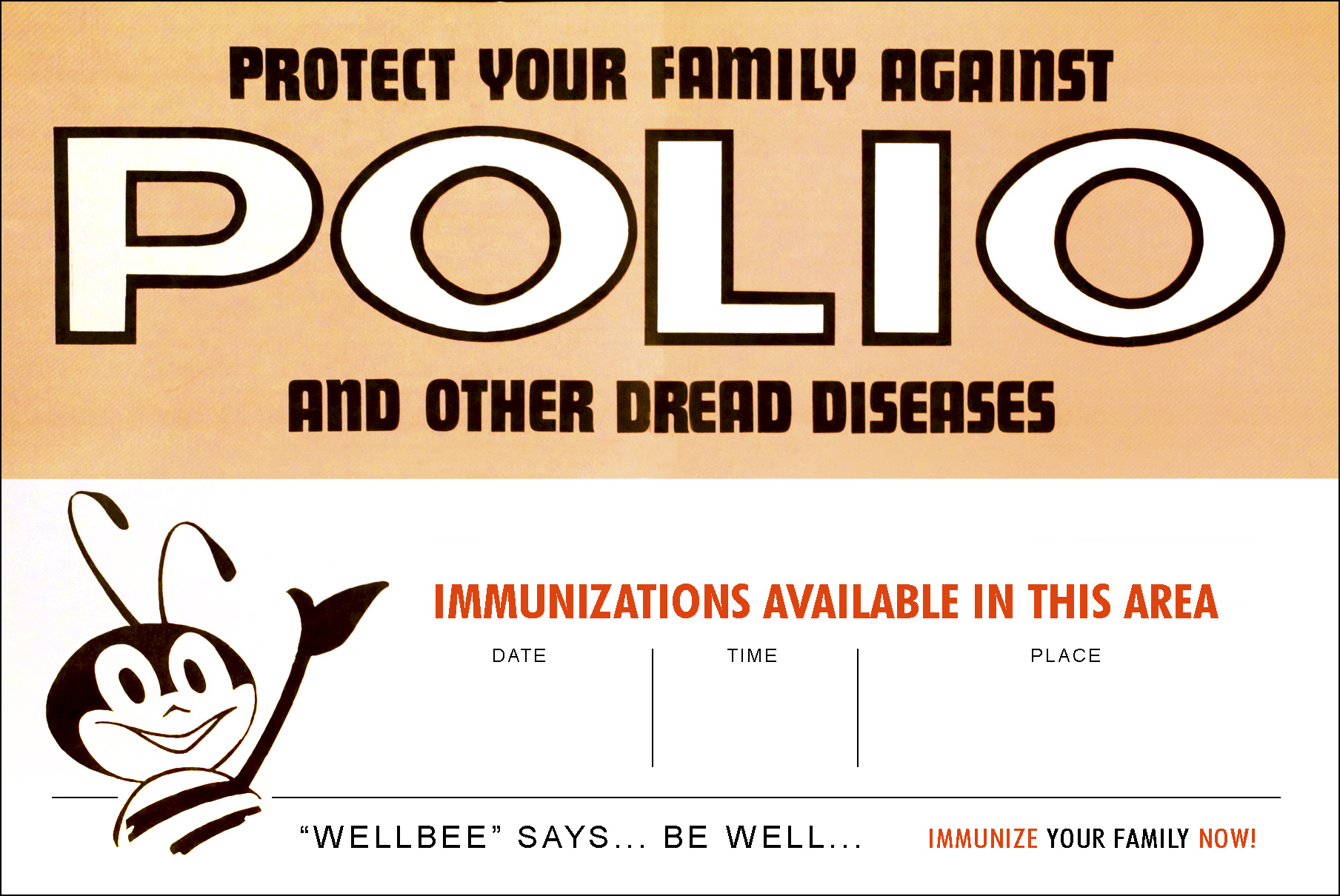 "This 1963 poster featured Center for Disease Control's (CDC) national symbol of public health, the 'Wellbee', and included the date, time and location of where one could receive a vaccination for polio, and other diseases." 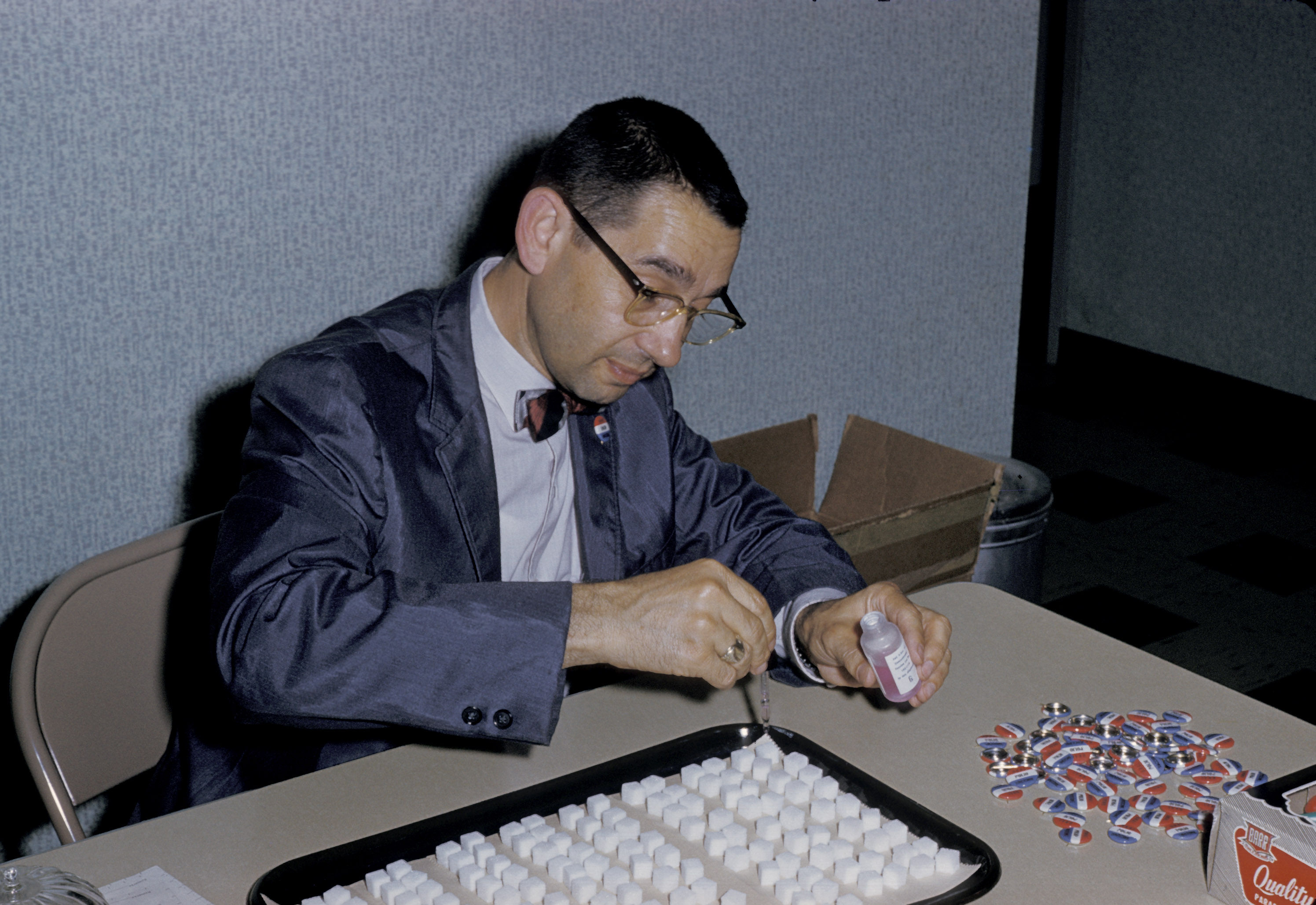 "A healthcare worker is dropping oral poliovirus vaccine on sugar cubes prior to immunization administration in 1961." 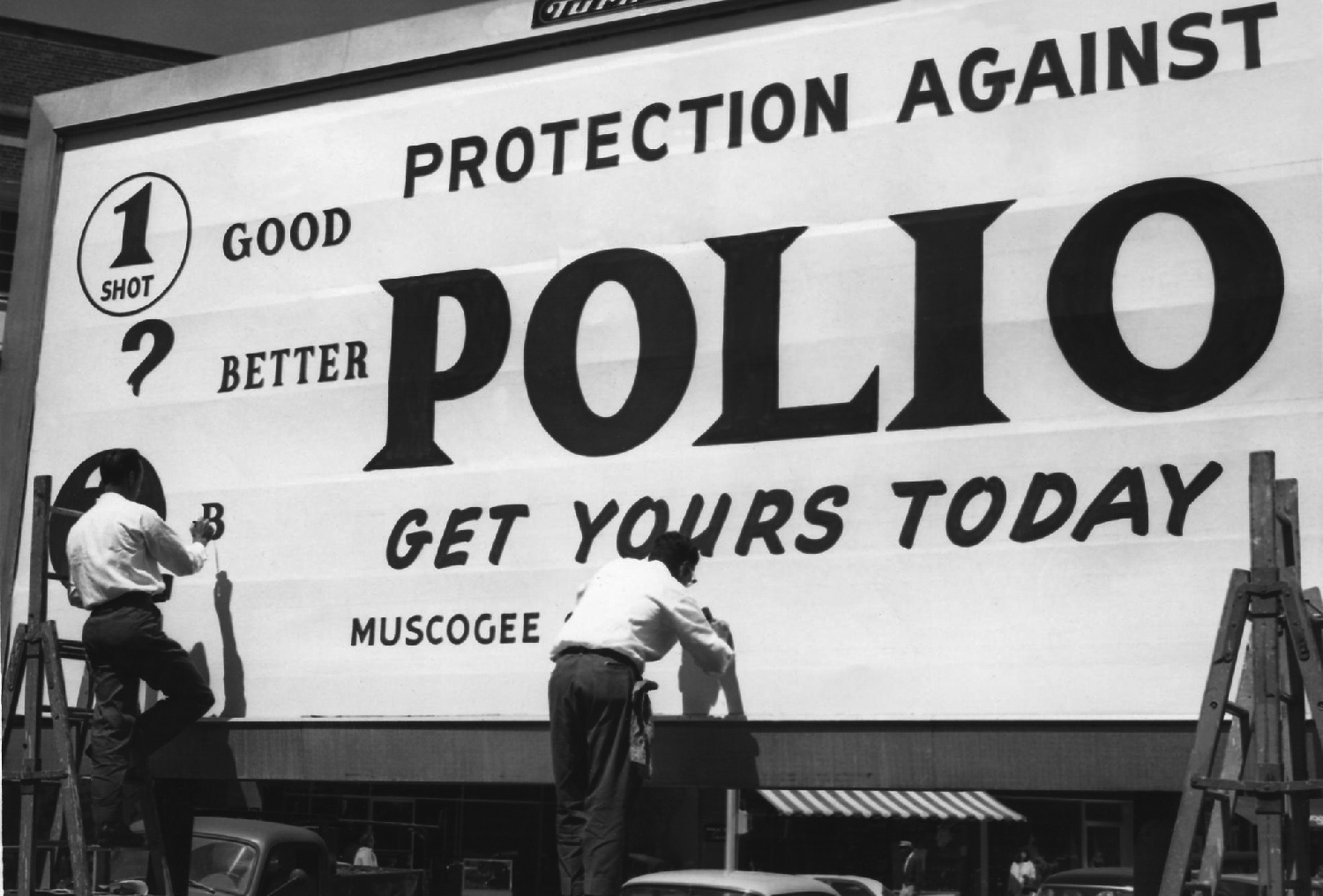 "This historical image, which depicts workers creating a billboard in Columbus, Georgia, shows one of the communication modes, the billboard, used to promote public health awareness, in this case, polio vaccinations within a community. The billboard, as well as television, magazines, and pamphlets, are only some of the myriad of modalities implemented when information of this kind is disseminated throughout society, and across cultural barriers."

Prevention and Eradication of Polio in Manitoba

Convalescent serum was used by health professionals during Manitoba's first polio epidemic in 1928. The serum was synthesized from the blood of a "recovered" victim of polio. Dr. F.T. Cadham, head of the Provincial Laboratory of Manitoba, supported the use of the serum, despite mixed opinions of its efficacy. Ultimately the serum failed, but the Laboratory claimed the serum could lessen the effects of polio if administered early enough and continued to be used for future epidemics. Unfortunately, Dr. Cadham and the Provincial Laboratory made this assertion based on a "relatively small sample and less than stellar results."6, 7

Nasal spray was also used at the time of Manitoba's next polio epidemic in 1936. Based on the ultimately wrong assumption that the nose was the point of entry for the virus, a mixture of various chemicals would be sprayed up the nose of a polio patient. Although only animal testing had been used up to this point, American and Canadian doctors recommended its use. The Manitoban mixture contained picric acid, salt, and alum which was to be sprayed up the nose several times a day. The spray did nothing to prevent or cure polio. Fortunately, the only side effect was the patient's nose would turn a bright yellow.8

In the 1950s, hope surrounded gamma globulin to be used against polio. Gamma globulin contains antibodies to poliovirus. Medical trials showed promise, but the sheer amount of blood needed to produce gamma globulin prevented its widespread use.9

Jonas Salk and Albert Sabin's vaccines changed the way health professionals dealt with polio. With the two vaccines, there were concrete solutions to this debilitating viral disease.

As a result of Sabin's and Salk's vaccines, polio soon became largely defunct.10 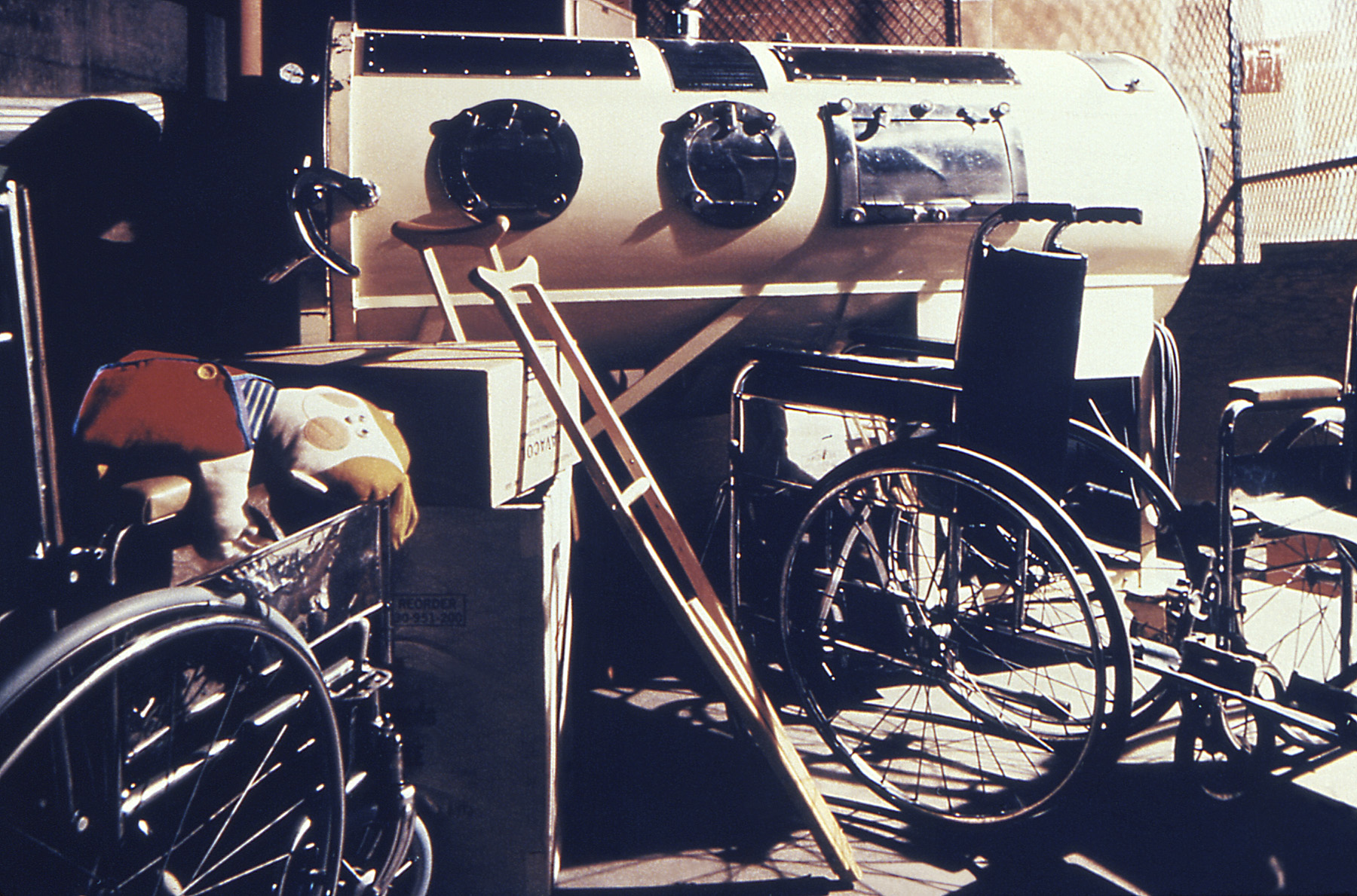 "A photograph of a collection of polio aids, including the iron lung, taken in 1977."

3. "This transmission electron micrograph (TEM) revealed the presence of coxsackie B3 virus particles, which were found within a specimen of muscle tissue."
ID# 10208. Centers for Disease Control/Dr. Fred Murphy; Sylvia Whitfield. 1975.